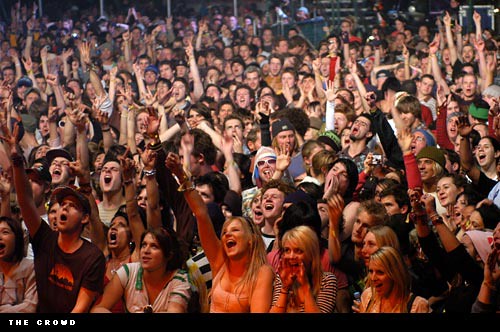 Let’s get one thing out of the way: Everyone is a fan of something.

It could be a band, or a football club, or a particular celebrity that you’re a fan of. You could be a fan of your kid, or your cat, or chocolate covered donuts. We are all different, but we all need something to be excited about.

There is, however, a difference between being a fan and BEING A FAN. There exists a group of people who take being a fan to a new level, which can make things rather problematic for the peaceful coexistence of fans of different orientation.

A good example of this was the recent Twitter fall-out between Grizzly Bear singer and songwriter Ed Droste and the die-hard core of Taylor Swift fans. For the past few weeks now Droste has taken to Twitter to express his disappointment with certain aspects of Swift’s behaviour towards himself in personal interactions. He contemplated on how Swift might not always convey the shiny personality she has the public eye see. Swift’s fans immediately responded with an excessive amount of tweets directed to Droste in an attempt to protect their idol’s reputation, and their reactions weren’t entirely pretty. Between the more sensible comments Droste also received a range of homophobic, racist slurs; words and phrases that are unacceptable to use under any circumstances.

Taylor Swift might be an extreme example as she has reached a level of popularity which is completely out of grasp for most pop stars nowadays, despite her young age. She has created her own little universe, built on thick brick stones of catchy tunes and commercial success; a universe in which she holds the throne of never-ending niceties and joy, and even the most reluctant person will eventually sing and dance along to ‘Shake It Off’. Her people worship her for everything good she stands for – unfortunately, this worship is also what turns them into ravaging vultures under attack. Obviously there will always be a group of people who are more fan than others; these are a kind of fan that are so invested in their idol’s life and art that they become a part of their lives.

But it is not just the pop music world in which fans tend to overemphasise their love and admiration. Another recent example has been seen in the world of theatre. Given, the object of fan desire is one known to make women go berserk, but this time it cost somebody a job. Currently, the Battersea Arts Centre is running its much anticipated interpretation of William Shakespeare’s ‘Hamlet’, in which Benedict Cumberbatch plays the lead role. The announcement of him returning to a West End stage has already caused loudly echoing applause and excitement amongst his dedicated fans over a year ago; the play basically sold out as soon as tickets were available; and Cumberbatch himself had to plead with his audience in front of the theatre to tell them what everyone who’s ever been to enjoy a theatre play would think is obvious, that they should please refrain from using their mobile phones to film this performance, because this isn’t the MTV awards.

When a stage technician from a different London based theatre takes to his private twitter account to state that he wasn’t a fan of this version of a classic, a horde of angry fans stepped in to bombard the guy with rather unfriendly replies. It went so far that his employer was about to enforce disciplinary actions on him, and he ended up leaving his employment. Now, the fans themselves might have not had a lot to do with the actual job loss, but they did put the emphasis on this person’s statement and lead his employers to the tweet in questions, something they might have not seen without the fan interaction, or might have ignored. But because it upset Cumberbatch’s fans, the company had to act and show that they do not stand behind their employee’s opinion.

Under normal circumstances it is totally fine to be a hardcore fan, to be invested in somebody’s work and actually emotionally care about them. But here is the problem with it: when an idol gets publicly criticised, be it for their work or for their private life, the die-hard fan feels criticised by association. Because everything they believe in lies within this idol, all of their world views and their tastes in music, films, books, etc. has been shaped by this idol. If someone comes and dares to show them up and tell them they have gotten it all wrong, they will of course take this criticism very personal. And you can’t actually blame them for it, as we are being trained to imitate idols, people with seemingly better lives and more knowledge, to become seemingly better people ourselves. We are made to believe that looking up to the people who are seemingly better off than us will make us better people as well, and so we go and believe in whatever they believe in. We hate whatever they hate. We know only what they tell us. Stars and pop culture have become our entire source of information. To this source of information we get attached, whether we are fans of a light-hearted pop star or a well-spoken Shakespearean actor. We don’t realise that as fans we have the power to offend and hurt, and what pain we are able to inflict on complete strangers in 140 characters or less.

Pop culture has shaped our belief system. Media has shaped the way we get told we believe in the wrong belief system. The internet has changed the speed in which we tell each other we’re wrong, and give each other hate for not believing what we believe in. Yet pop culture lives of the variation of genre and individual taste, because it wouldn’t be able to reinvent itself without it. Even more ridiculous is the hypocrisy of fandom when we shame others for not liking the right things, all the while distancing ourselves from something as soon as it becomes too popular because it ‘has become too commercial’.

All this we tend to blank from our minds when we play our fan teams against each other. If we could take a moment to think about the How and Why of our fan love, we would notice that we all do fandom for pretty much the same reasons: a) we like something, so we want more of it. b) it is a form of escapism from the real world or problems we are facing. c) it gives us value, because we are in the know, can see the artistic value of something and spread the information on to others. It seems as though acceptance of these common grounds is too simplistic for most. Arguments and differences are celebrated instead. Individuality is both celebrated and frowned upon. This will only get worse as technology evolves, when all of our ‘likes’ and ‘favourites’ are going to speak for us and become the sole criteria on which we get cruelly judged by others. This is when artistry will die, as at this point the likes and favourites will be less an indicator of what we like, but more an indicator of who we want to portray according to popular opinion. I don’t know about you, but I am dreading this moment like a colonoscopy.